In this NTR test setup, the exhaust is slowed from supersonic to subsonic speeds, allowing O2 to be injected and mixed well past the molar equilibrium point for H2O. The resultant mixture is then combusted, resulting in hot steam and free O2. A water sprayer is used to cool the steam, and then passes through a debris trap filled with water at the bottom. It is then captured in a storage pool, and the remaining gaseous O2 is run through a desiccant filter, which is exhausted into the same storage pool. The water is filtered of all fission products and any unburned fuel, and then released. The gaseous O2 is recaptured and cooled using liquid nitrogen, and whatever is unable to be efficiently recaptured is vented into the atmosphere. The primary advantage to this system is that the resulting H2O can be filtered at leisure, allowing for more efficient and thorough filtration without the worry of over-pressurization of the system if there’s a blockage in the filters.

There are many questions that need to be answered to ensure that this system works properly, as there are with all of the systems that have yet to be tested. In other to verify that the system will work as advertised, a sub-scale demonstrator will need to be built. This facility will use a hydrogen wave heater in place of the nuclear reactor, and test the rest of the components at a smaller scale wherever possible. Due to the specific needs of the exhaust capture system, especially the need to test complete combustion at different heat loads, the height of the facility may not be able to be scaled down (in order to ensure complete combustion, the gas flow will need to be subsonic before mixing and combustion). Thermal loading on structures is another major concern for the sub-scale test, since many components must be tested at the appropriate temperature, and the smaller structures won’t be able to passively reject heat as well. Finally, some things won’t be able to be tested in a sub-scale system, so what data will need to be collected in the full-scale system needs to be assessed.

One last thing to note is that this system will also be used to verify that high-velocity impacts of hot debris will not be a concern. This was, of course, seen in many of the early Rover tests, as fuel elements would break and be ejected from the nozzle at similar velocities to the exhaust. While CERMET fuels are (likely) more durable, this is an accident condition that has to be prepared for. In addition, smaller pieces of debris need to be able to be fully captured as well (such as flakes of clad, or non-nuclear components). These tests will need to be carried out on the sub-scale test bed to ensure for the regulators that any accident is able to be addressed. This adds to the complexity of the test setup, and encourages the ability to change the test stand as quickly and efficiently as possible – in other words, to make it as modular as possible. This also increases the flexibility of the facility for any other uses that it may be put to. 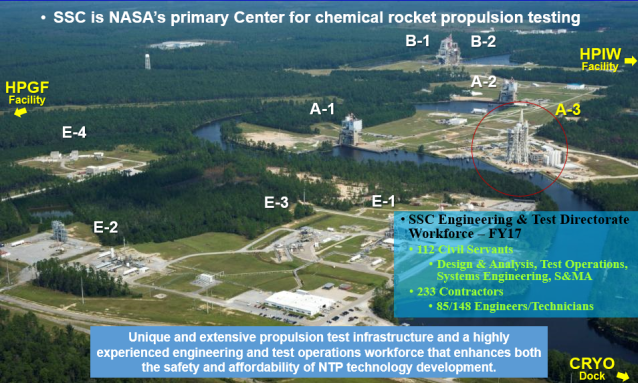 This last testing concept seems to be the front-runner for current NASA designs, to be integrated into the A3 test stand at NASA’s Stennis Space Center (SSC). SSC is the premier rocket test facility for NASA, testing both solid and liquid rocket engines. The test facilities are located in the “fee area,” a 20 square mile area (avg. radius 2.5 miles) surrounded by an acoustic “buffer zone” that averages 7.9 miles in radius (195 sq mi). With available office space, manufacturing spaces, and indoor and outdoor warehouse space, as well as a number of rocket engine test stands, the facility has much going for it. Most of the rocket engines being used by American launch companies have been tested here, going all the way back to the moon program. This is a VERY advanced, well-developed facility for the development of any type of chemical engine ever developed… but unfortunately, nuclear is different. Because SSC has not supported nuclear operations, a number of facilities will need to be constructed to support NTR testing at the facility. This raises the overall cost of the program considerably, to less than but around $850M (in 2017 dollars). A number of facilities will need to be constructed at SSC to support NTR testing, for both E3 and A3 test stands.

Image from Houts presentation 2017, via NASA

As one of the newer facilities at SSC, the A3 test stand groundbreaking was held in August of 2007, and was completed in 2014. It is the only facility that is able to handle the thrust level (300+ Klbf at altitude, 1,000 Klbf nominal design) and simulated altitude (100 Kft) that testing a powerful upper stage requires. There are two additional facilities designed to operate at lower-than-ambient atmospheric pressures at SSC, the A2 test stand (650 Klbf at 60 Kft) and the E3 test facility (60 Klbf at 100 Kft). The E3 facility will be used for sub-scale testing, turbopump validation, and other tests for the NTP program, but the A2 test stand seems to not be under consideration at this time. The rest of the test stands at SSC are designed to operate at ambient pressure (i.e. sea level), and so they are not suitable for NTP testing. 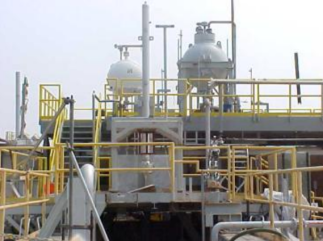 The E3 facility would be used for sub-scale testing, first of the turbopumps (similar to the tests done there for the SSME), and sub-scale reactor tests. These would likely be the first improvements made at SSC to support the NTP testing, within the next couple years, and would cost $35-38M ($15-16M for sub-scale turbopump tests, $20-22M for the sub-scale reactor test, according to preliminary BWXT cost estimates). Another thing that would be tested at E3 would be a sub-scale engine exhaust capture system, which has been approved for both Phases 1&2, work to support this should be starting at any time ($8.74M was allocated to this goal in the FY’14 budget). From what I can see, work had already started (to an unknown extent) at E3 on this sub-scale system, however I have been unable to find information regarding the extent of the work or the scale that the test stand will be compared to the full system.

The A3 facility has the most that needs to be added, including facilities for power pack testing ($21M); a full-flow, electrically heated depleted uranium test (cost TBD); a facility for zero power testing and reactor verification before testing ($15M); an adjacent hot cell for reactor cool-down and disassembly (the new version of the EMAD facility, $220M); and testing for both sub-scale and full scale fission powered NTP testing (cost to be determined, it’s likely to be heavily influenced by regulatory burden). This does not include radiation shielding, and an alternate ducting system to ensure that the HVAC system doesn’t become irradiated (a major headache in the decomissioning of the original E-MAD facility). It is unlikely that design work for this facility will start in earnest until FY21, and construction of the facility is not likely to start until FY24. Assuming a 10 year site licensing lead time (which is typical), it is unlikely that any nuclear testing will be able to be done until FY29, with full power nuclear testing not likely until FY30. 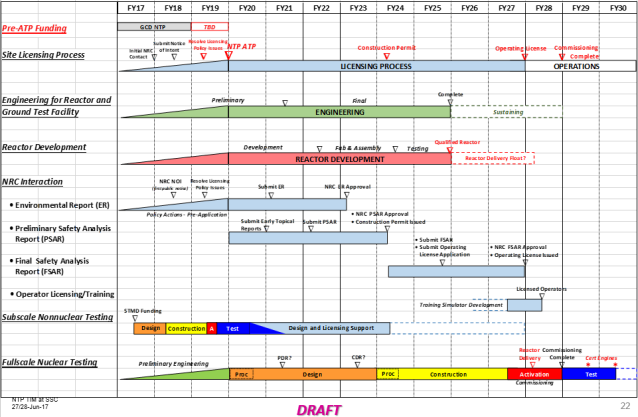 Documents relating to the test stands at SSC show that there has been some funding for this project since FY ‘16, but it’s difficult to tell how much of that has gone to analysis, environmental impact studies, and other bureaucratic and regulatory necessities, and how much has gone to actual construction. I HAVE had one person who works at SSC mention that physical work has started, but they were unwilling to provide any more information than that due to their not being authorized to speak to the public about the work, and their unfamiliarity with what is and isn’t public knowledge (most of it simply isn’t public). According to a presentation at SSC in July of 2017, the sub-scale turbopump testing may start in the next year or two, but initial design work for the A3 test stand is unlikely to start before FY’21.

According to the presentation (linked below), there are two major hurdles the program needs to overcome on the policy and regulatory side. First, a national/agency level decision needs to be made between NASA, the DOE, and the NRC as to the specific responsibilities and roles for NTP development, especially in regards to: 1. reactor production, engine and launch vehicle integration strategy, and 2. ground, launch, and in-space operations of the NTR. Second, NTP testing at SSC requires a nuclear site license, which is a 9-10 year process even for a traditional light water power reactor, much less as unusual a reactor architecture as an NTR. This is another area that BWXT’s experience is being leaned on heavily, with two (not publicly available) studies having been carried out by them in FY16 on both a site licensing strategy and implementation roadmap, and on initial identification of policy issues related to licensing an NTP ground test at SSC.

The most basic type of nuclear rocket, more adaptable and efficient than chemical rockets. Read more →

While Project Orion is the most famous pulse drive system, many more options for this potent drive concept have been studied. Read more →

Building a nuclear reactor is hard, here's how we can test the components and system before launch! Read more →