Arcjets are definitely the gray area between thermal and magnetically based propulsion, arc heating, is a very interesting option. Here, a spark, or arc, of electricity is sustained between two electrodes. This heating is virtually the same way an arc welder operates. This has the advantage that you aren’t thermally limited by your resistor for your highest thermal temperature: instead of being limited to about a thousand Kelvin by the melting point of your electric components, you can use the tens of thousands of Kelvin from the plasma of the arc – meaning more energy can be transferred, over a shorter time, within the same volume, due to the greater temperature difference. In most modern designs, the positive electrode – the anode – is at the throat of  the nozzle. However, this arc also erodes your electrodes, carrying ablated and vaporized and even plasmified bits of their material., So there’s a limitation to how long this sort of thruster can operate before the components have to be replaced. The propellant isn’t just heated by the arc itself, but also conduction and convection from the heated structural components of the thruster.

Arcjets have been studied by NASA since the 1950s, however they didn’t become commonly used in spacecraft until the 1990s. Several companies, including Lockheed Martin and others, offer a variety of operational arcjet thrusters. As with the resistojet, the chemical stability is excellent for piggyback payloads, and they offer better efficiencies than a resistojet. They are higher-powered systems, though; often higher than your average satellite power bus (sometimes in the kW range), necessitating custom power supplies for most spacecraft (in a nuclear-powered spacecraft, this would obviously be less of an issue). Arcjets offer much higher exhaust velocities compared to resistojets, generally 3500-5000 m/s for hydrazine decomposition drives similar to what we discussed above, and up to 9000 m/s using ammonia, and are also able to scale by both scale and power efficiently. In these systems, though, the propellant doesn’t necessarily need to be a gas or liquid at operational temperature: some thrusters have used polytetrafluoroethelene (PFTE, Teflon) as a propellant.

This type of propellant is also very common in a sub-type of arcjet thruster, one that doesn’t use an internal cathode: the pulsed plasma thruster. Here, the PFTE propellant block is brought into contact with a cathode on one side of the thruster, and an anode on the other. The electric charge arcs across the gap, vaporizing the propellant, and pushing the propellant back slightly, The arc and resulting plasma continue to the end of the thrust chamber, and then the propellant (usually loaded on a spring mechanism) is brought back to the point that the propellant can be vaporized. This type of thruster is very common for small spacecraft, since it’s incredibly simple and compact, although certain designs can have engineering challenges with the spring mechanism and the lifetime of the cathode and anode.

Arcjets can also be combined with magnetoplasmadynamic thruster acceleration chambers, since arc heating is also a good way to create plasma. The pulsed plasma thruster often uses electric arcs for charging their propellant, for instance. This mechanism is also used in magnetoplasmadynamic (MPD) thrusters, which is why we haven’t placed them with the rest of the thermal thrusters.

In fact, there’s more in common between an arcjet and an MPD thruster than between other thermal designs. The cathode and anode of an arcjet are placed in exactly the same configuration as most designs for an MPD (with some exceptions, to be fair). The exhaust itself is not only vaporized, but ionized, which – like with the RF or MW thrusters – lends itself to adding electromagnetic acceleration. 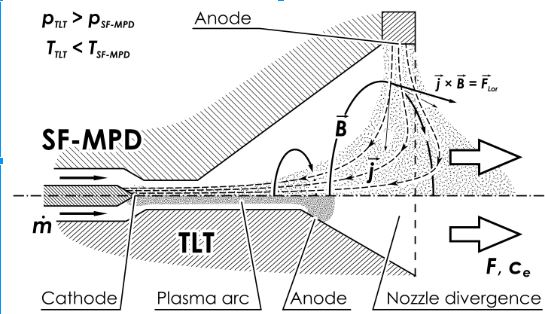 Comparison of self-field MPD and arcjet thruster geometry. Top half of the diagram is MPD, bottom half arcjet, in same scale. (Institute of Space Systems, USTUTT)